Drones for Search and Rescue


In November of 2017 we volunteered our drone services to help a veteran search for their missing service dog. We leveraged social media, tapped into the soldbyair network and spread the word by any means we could. We assembled a team of 9 drone pilots and spent 2 and a half hours searching for the missing pet. Below is an overview of our attempt and the details that went into planning so that others may learn from our experience. 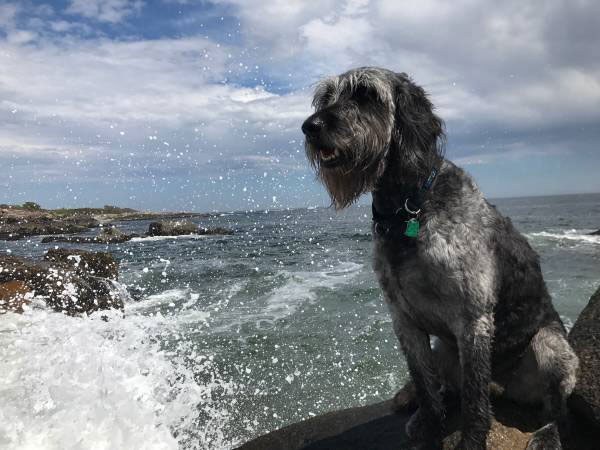 Ozzy is a service dog from Newark Delaware who went missing about 3 weeks before our search attempt. He is large with grey shaggy hair. Unfortunately he was groomed very recently before he went missing so the belief was that he would look very similar to the many deer this time of year.

We knew he would be in a different frame of mind. Dogs who are in the wild revert to survival mode. It's said that even their owners will not be able to call them.

We first reached out to our drone pilot network to ask for volunteers. A number of operators responded. We then posted details about the operation to our facebook page and asked users to share the post. Many did, this was an extremely powerful communication mechanism as it brought in additional pilots to the list of volunteers. We also shared details about the effort to multiple drone related groups on facebook. This too helped to increase the pilot pool. While the largest number of pilots came from our own drone network all 3 methods where highly valuable and yielded results.

We asked the pilots questions focusing on 3 primary topics.

The team was put together on very short notice (about 3 days). 10 said that they would show up and only 1 was a no show. The enthusiasm was amazing. 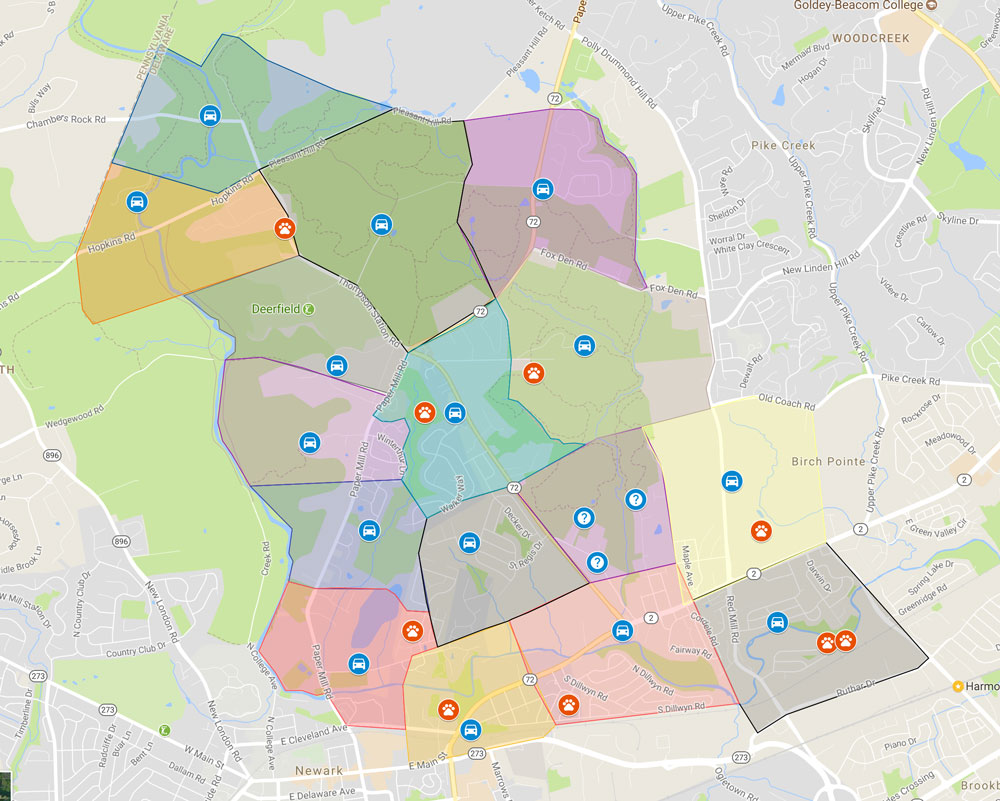 We based the overall search area on where Ozzy had been spotted recently. Utilizing Google's "My Maps" we created a custom map of this search area that we sectioned off into what we called 'quadrants'. We attempted to center these quadrants on areas we felt that a drone operator could park safely and launch their drone from. Where possible we tried to end the quadrants at easily identifiable landmarks (main roads, streams etc).

I personally took my drone out for a practice run in my own neighborhood to get a feel for range, visual line of sight and what made sense for the mission. We placed icons on the map to mark the area to park and the areas Ozzy was last spotted.

Permission was granted for the search by Delaware Parks and Recreation. Normally drones are banned in DE parks, but because of the circumstances they gave us expedited permission. They deserve a thanks for doing so.

We created individual quadrant maps to reduce the time to locate Ozzy should someone spot him. We started by taking a transparent grid and then overlaying it on top of the quadrant in photoshop. 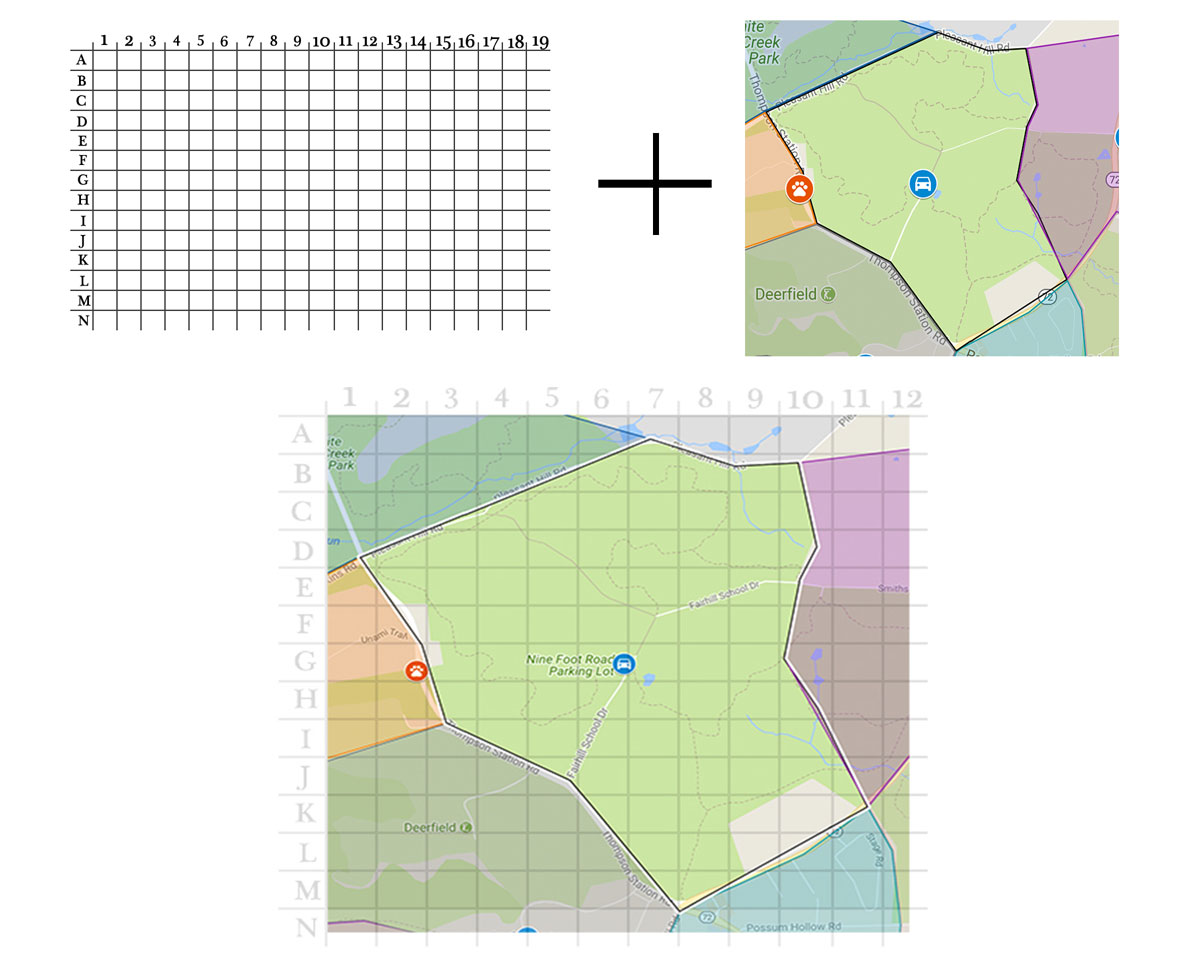 The idea here is that should a pilot see Ozzy they call back to the central command post saying "I see Ozzy, I am in quadrant A. He is located in sector G-6 on my map". The central command had an extra copy of each quadrant map so they could determine a course of action based on the most recent data provided.

A list of parking locations for all quadrants was also attached. This was done so that pilots in the field could quickly converge on specific areas if needed. 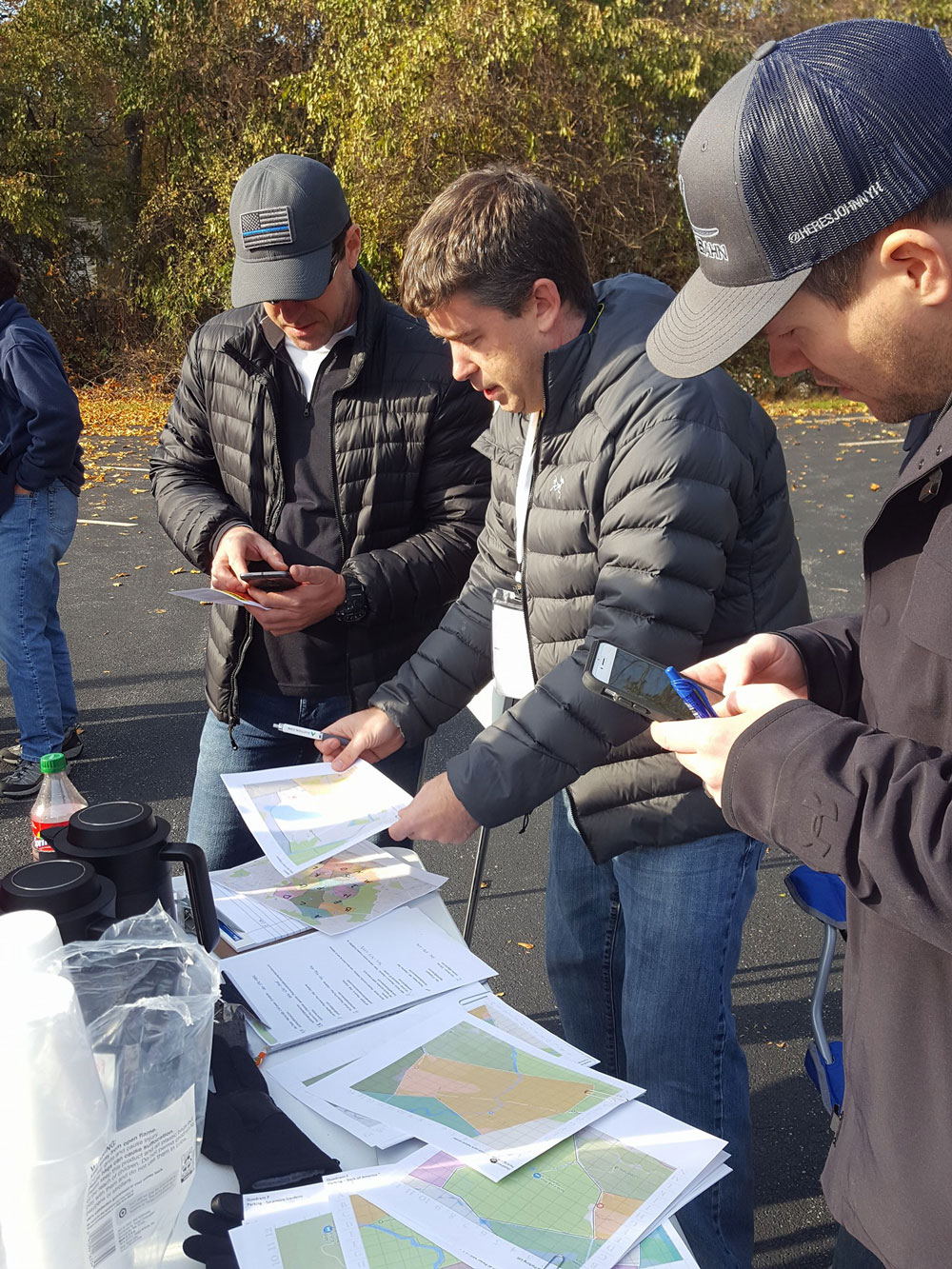 We setup a central base station where everyone first met to get their assignments. We did not hand out any assignments prior to arrival to prevent issues with no shows. We went over the plan and reiterated that if we were going to make an attempt to capture the dog vs set a bait station that decision would be made centrally and not by anyone in the field.

Operators were instructed to fly high and slow as Ozzy would hear the drone before the drone sees him. It was imperative not to spook him. We asked the operators to focus their search on streams, paths/trails and edges(where grass meets forest) as we most expected to see Ozzy in those areas.

As quadrants were handed out we took down the operators cell number and noted the quadrant they were to be based in. Those who had to use a cell phone to control their drone were asked to buddy up with a non-drone volunteer. A group text was created for communication during the search and the operators then dispersed to their quadrants.

While leaves had been falling for awhile there was still a fair amount of foliage on the trees. This hindered some of the search, nonetheless we were still able to spot and track a large amount of activity. Parking/launch areas are tough to come by. This was over veterans day weekend and we were searching for a veterans missing service dog. Nonetheless, Bank of America still tossed a pilot out of their nearly vacant parking lot.

We did not have anyone with Flir gear which would have been very helpful. However, thermal drone equipment is expensive and not a ton of people have it. I wouldn't bank on people showing up with this gear to your drone search. The group text worked exceedingly well for communication. However for other areas you may need something else. I reached out to the local HAM radio group but did not get a response in time. They may be interested in helping or offer advice. You can try to reach out to a group near you here.

Sadly we did not find Ozzy. A key takeaway was that if Ozzy was in the search area and on the move we would have seen him. If he was huddled up under some sort of cover we probably wouldn't have. All things considered, the biggest thought I'm left with is that there are still plenty of good people in the world. Drone pilots drove from all over to take part in this entirely volunteer effort. Events like this can help to restore ones faith in humanity. Thank you, to everyone involved!


This article is part of a series of tutorials we are developing to help drone pilots servicing the real estate industry. If you like what you've read consider joining our Drone Pilot Network